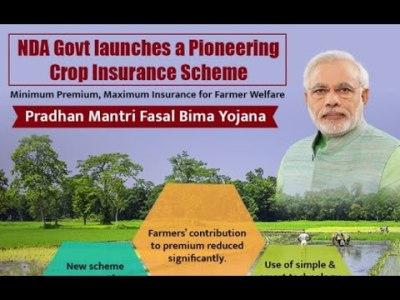 With the launch in kharif 2016 season, India's Pradhan Mantri Fasal Bima Yojana (PMFBY) has made good progress, as it has covered over 26.50 per cent or 36.66 million farmers.

According to the Indian agriculture ministry estimates, it touch to 30 per cent by the this rabi season in 2016-17.

In terms of total area covered the achievement has been significant amounting to a total area of 38.86 million hectares and sum insured of $20.88 billion (Rs 141,339 crore).

The PMFBY was recast as a new scheme by the Government as the earlier existing insurance schemes were not meeting the full requirements of the farmers for insurance coverage.

The performance in Kharif 2016 is better despite the fact that there were teething issues to begin with. For instance, many States did the bidding process for selection of the insurance companies for concerned clusters for the first time and consequently, the notification of the scheme was delayed in a number of States.

Another significant achievement in this season has been 104 per cent enhancement in sum insured. This was made possible as PMFBY mandates that the sum insured must be equal to the Scale of Finance and therefore, reflects better risk coverage of farmers in comparison to earlier schemes.